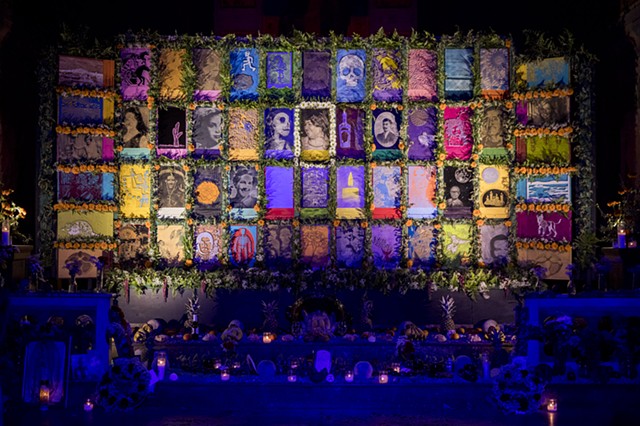 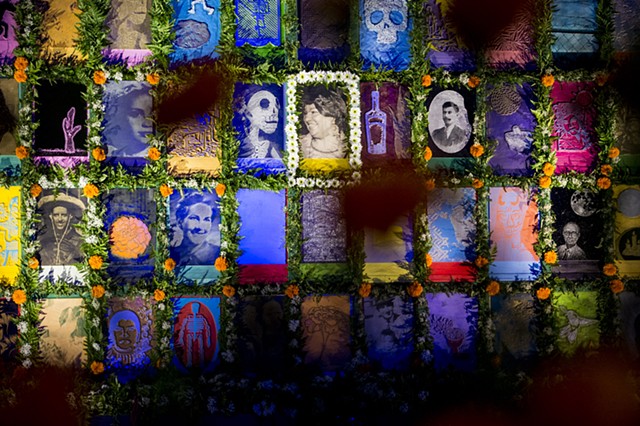 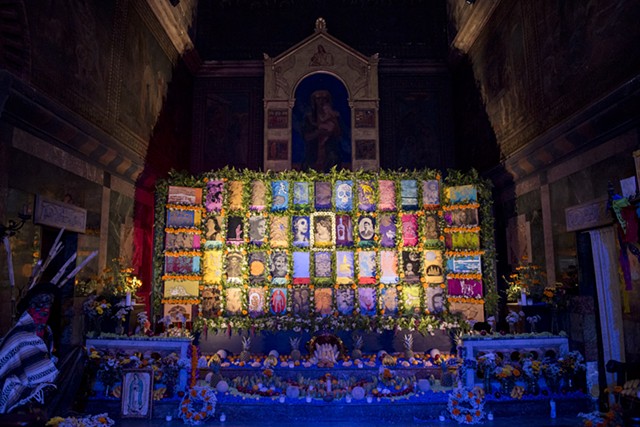 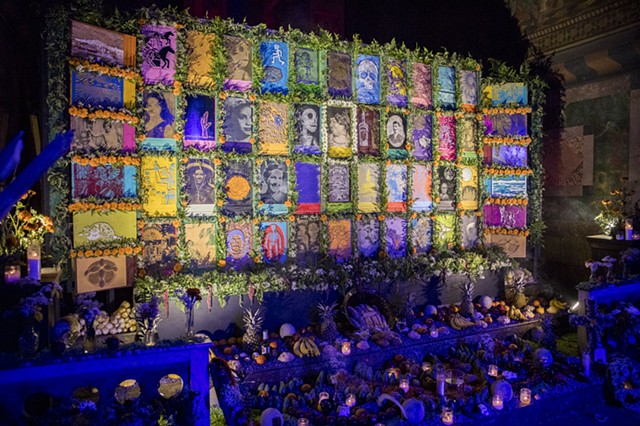 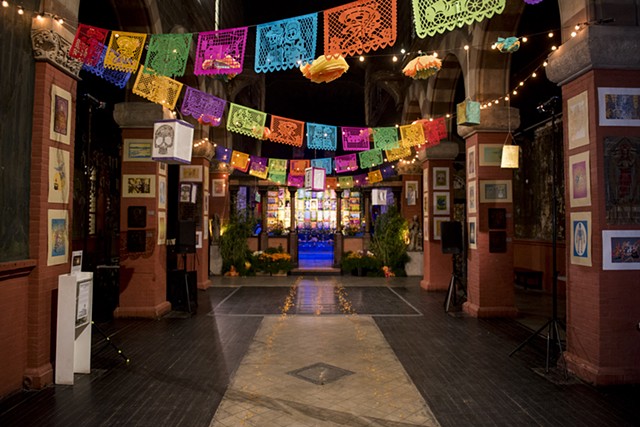 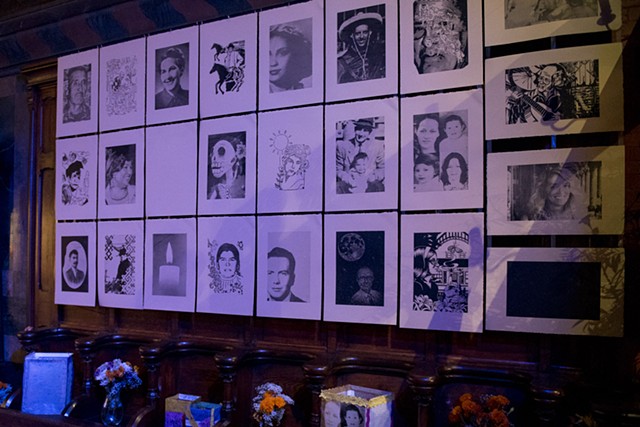 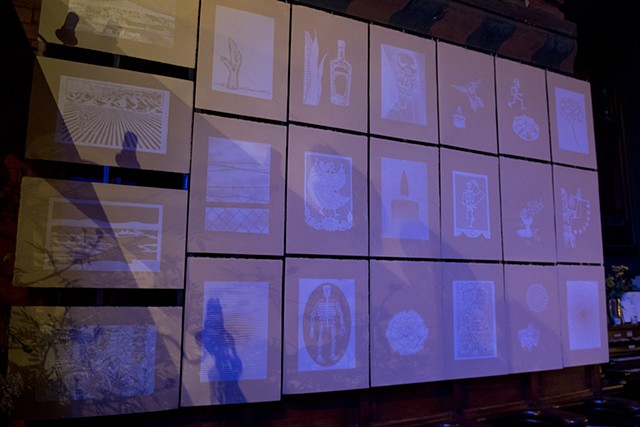 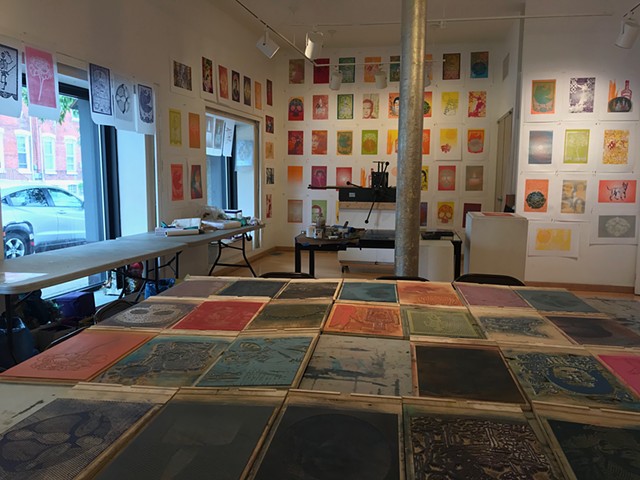 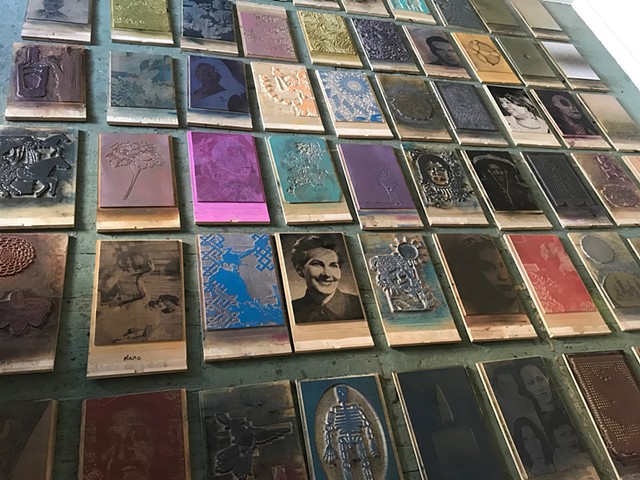 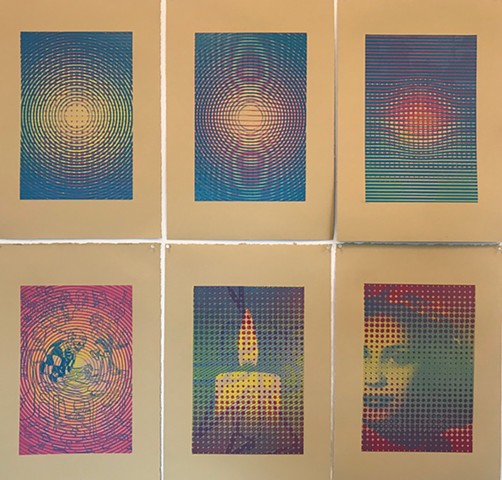 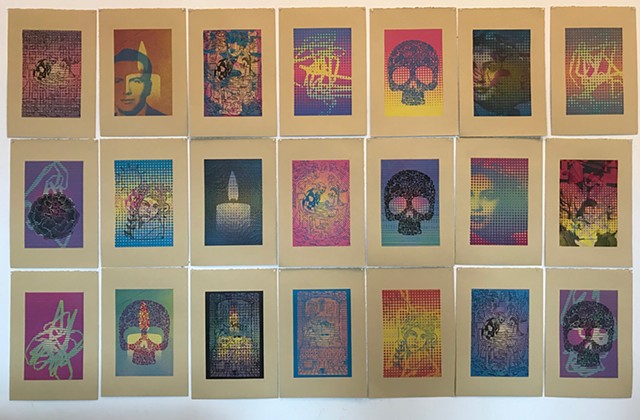 This year’s Día de los Muertos artist, Alexis Nutini, was born in Mexico and moved to Pittsburg at age 10. Later relocating to Philadelphia, he has been a South Philadelphia resident for more than 10 years. Nutini currently teaches printmaking at Tyler School of Art and Mercer Community College and maintains his own print studio.

Nutini grew up with Día de los Muertos as a central part of his family life, experiencing the creation of his family ofrenda each year. Growing up, he always appreciated the collective nature of the process of creating ofrendas, with each detail, icon, and object becoming a meaningful and intentional offering to the deceased. He is also the son of a cultural anthropologist who researched the tradition across the Puebla and Tlaxcala regions. Through his father’s research, he has witnessed how diverse the tradition can be between families and communities.

Nutini’s installation at Fleisher is based on the theme ofrenda de todos, or “everybody’s altar.” He aims to pay respects not only to the deceased friends and relatives of community collaborators, but also to those who are invisible or forgotten, such as the countless laborers in American and the millions of immigrants caught in their own diasporas around the world.

The process used to create the prints for the altar in Fleisher’s Sanctuary space is unique and one that Nutini used for the first time to engage a diverse group of contributors in a collaborative process. CNC routing enables people to create woodcuts without the process of hand carving. Using digital images, Nutini prepared files to be read by the router, which carves the wood blocks. Next, Nutini completed the prints using the traditional relief printing process. By greatly reducing the time and energy that would be spent carving woodcuts by hand, the CNC routing process enables collaborators to focus on their vision and makes the process much more accessible.

Nutini solicited contributions from local artists and contributors who attended workshops at Fleisher, including the Calaca Flaca committee. By relying on digital images, the method allowed contributions from other artists of the Mesoamerican diaspora in places as far away as California. Nutini’s friends and colleagues living in Mexico, as well as artists he contacted through Instagram also participated.

Acknowledging that every culture has a way of honoring the dead, there is enormous potential for collaboration for Día de los Muertos. Nutini emphasizes the importance and impact of the collaborative aspect of creating an ofrenda, and each piece is intentional. To onlookers it may seem macabre or a scary assortment of strange objects, but each piece carries centuries of cultural significance. The duality of life and death, ancient imagery that has been influenced by Catholicism, connections to the harvest, or a deceased relative’s favorite tequila or pulque all have their place on the altar.